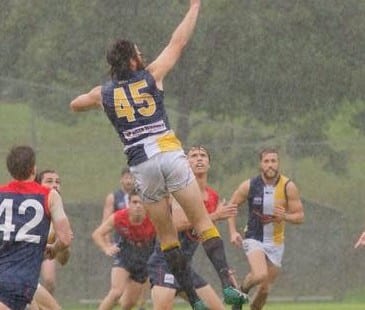 Apparently Bundaberg, Queensland may be his home town, but no one except his Mum really knows exactly where he came from.  His Facebook page (which presumably he himself updates) says he was born July 5th 1986, so the world has had the pleasure of his company now for nearly 29 years.

Just where he cohabitated between 1986 and 2007 is anybody’s guess.  In 2008 (which is the first year Google can find any reference to him) he played with Morningside in Brisbane and represented the QAFL against WA in Townsville as a team mate to some big names who finished up with Brisbane and the Gold Coast.  But our boy didn’t get to AFL level with them because he decided to hitch a ride north to Cairns ready for a tropical 2009. 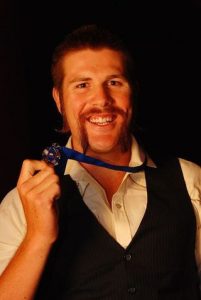 He decided to play with the South Cairns Cutters (I’m tipping they were in sugar cane country) and no doubt with a bellyful of Bundy Rum in him he enjoyed a stellar debut season. In fact it was so good he won the Crathern Medal with 25 votes in the far north Queensland comp. The gala presentation night completely belonged to Andrew Browning who treated the audience to a full length rendition of the Van Morrison classic “Jackie Wilson Said” – complete with dance moves after accepting his award.  Later that week big AB’s side the Cutters lost the GF to the Cairns Saints.

Click here to watch a video of the great man’s 2009 season.  Check out the haircut at the end!!

Not sure where he disappeared to after 2009, although I think Tatura in the Goulburn Valley League may have played some part in the big man’s burgeoning footy career. But in 2013 he popped up at Belconnen to play with their NEAFL side. The Magpies met the Swans in the Grand Final that year but lost when AB went down for the count with concussion.

And then in 2014 he became an Eagle when he and his lovely partner Kimberly Gorrie wandered into (then) Bruce Purser Reserve looking for a game. The bearded one made an immediate impression on everyone with his unbelievable energy and drive for the game which was never more evident than in last Saturday’s top of the table clash against Pennant Hills.

His performance in at times torrential rain inspired this writer to research his background because he won’t tell us. Coach Michael Sankey commented after the game …. “AB was best on by a country mile today. His was a herculean effort considering the conditions and deserved to win it twice.”  AB took it upon himself to ruck all day, kick the longest goal of the match with a second quarter drop punt using a very wet and heavy footy and lead the side to the top of the Round 4 ladder.

Directed by Browning, the Eagles showed extraordinary commitment and skills in the difficult buy generic cialis online in usa conditions to win the Warren “Pops” Quintrell shield for the first time since 2011.  (It was competed for during our time in the NEAFL but it was always going to be difficult to win it.)  Understandably scores remained low, but nevertheless the final margin of 28 points was indicative of East Coast’s superiority on the day.

The re-match at Kanebridge Oval takes place on July 4th when the Back to Baulko day and Mr Perpetual Motion explode into action. Don’t miss it …..

This week’s Red and White Online summary of Round 4 can be found here.

Division One saw the debut of 26 year old Blake Anderson who has just arrived at East Coast from Perth where he was a regular League player with Claremont. The club took the opportunity of acclimatising Blake in the ‘twos’ this week against Pennant Hills, but his inclusion was not enough to avoid a 22 point defeat at the hands of the Demons. Matty Scholz was best and Anderson obviously impressed his new team mates with them judging him as their Players’ Player.

The U19’s opened like a bullet out of a gun against the highly fancied Demons’ outfit and surprised the host team by leading well at quarter time, 3-1 to 1-2. Isaac Heath was the spearhead and confidence was high. From here however Pennant Hills took control kicking 10-13 in the last three quarters to finally win by 55 points. Best for the Eagles were James Monks and Alexander Van Vliet. 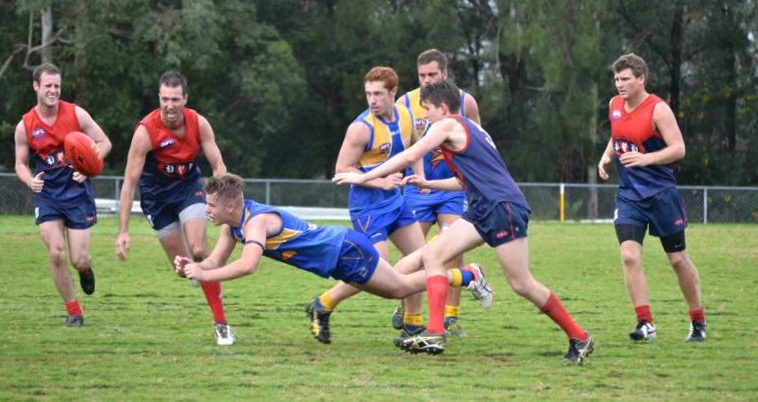 The first game of the day saw a very popular breakthrough win for Matt O’Connor’s Division Three side. Once again the opponent was arch rival Pennant Hills and the lads had been fired up for victory for two weeks, having been rained out last week. It was neck and neck in the first two quarters with just three and two points between them at the first two breaks. But a strong third quarter during which the Demons were held goalless saw the Eagles pull out a match winning break which was further enhanced in the last to win by 18 points. Nick Murfitt played his best footy for the season thus far to take out the BOG honours.

All updated Eagles Extravaganza results can be found at this link.

storeit self storage
Scroll to top