The first three rounds of AFL Sydney football have provided contrasting fortunes for all the East Coast Eagles teams. 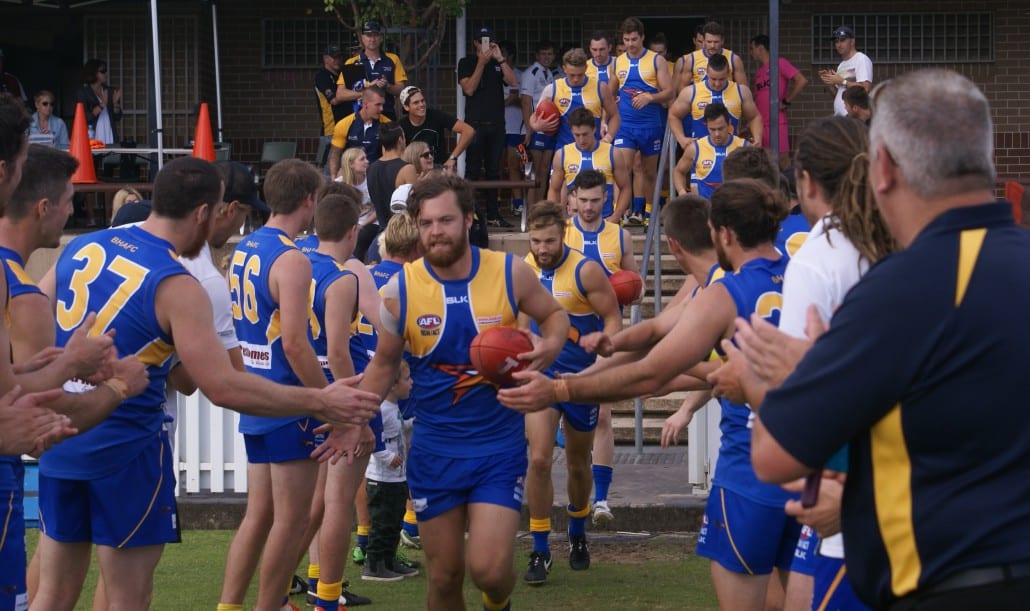 Jack Dimery leads out the Eagles in his 100th game. Picture courtesy of Mark Spiteri.

At Premier Division level this was the match up that most in Sydney football had waited five months for since the 2015 fixture was announced by AFL Sydney. The reigning Premiers Manly Giants (2013 / 14) up against the returning East Coast Eagles who, prior to joining the NEAFL in 2012, had taken out successive flags in 2009, 2010 and 2011.

The weather was fantastic, the newly named Kanebridge Oval was in superb condition and the crowd was rolling in to watch two sides go at it hammer and tong in an attempt to claim early bragging rights. Jack Dimery playing his 100th senior game for the Club led the team out into the abundant sunshine. Every one of those 100 games has been at Premier Division or NEAFL level.

Both sides started well and had four each on the board at quarter time. But it just “looked like” the Eagles were gaining the upper hand.  Kicking to the Vesta Homes Commercial Road end in the second term, East Coast piled on 7-1 to go into half time 27 points up.

On the terraces the Eagles supporters were happy to see their returning side well on top but as always every fan knows that the second half can play tricks. In a very tight and tactical third quarter the Eagles could only increase their lead by seven points. The score at ¾ time was 13-2 to 6-10.  The Giants had more scoring shots, which can often be an indicator as to whether a side still remains in touch with the leader.

And that’s the way it turned out. A cracker of a last quarter saw East Coast in front at the 20 minute mark by 23 points, 15-5 to 10-12.  At the 25 min mark it was 16 points, and at the 27 minute mark it was 10. With 29 seconds left the Eagles were desperately hanging on to a three point margin which they still held when the final siren blew. Trouble was the ball was in the hands of Manly’s Tom McCaffery who had marked 40 metres out from goals at the Vesta Homes School end.  His shot wobbled through, but shaky or not, it still counted for six points and the Giants had stolen a most unlikely victory.

Trent Stubbs was best for the home side and also took the goal kicking honours with five.

In other grades East Coast had a fabulous win over a shell shocked Southern Power by 60 points with James Ford starring in a wonderful comeback to AFL footy after two years away overseas.

Division Three went down by 37 points in what was really a high standard game. Our boys were good, but Sydney Uni were simply better.  Will Dickinson took the honours for best on and put some cash in his owners’ pocket in Round 1 of Extravaganza. You can always read about all the results in Eagles Extravaganza each round by clicking here.

The U19’s, most of whom are new to the Eagles in 2015, lost to Manly by 69 points under lights after the Premier Division game had finished. Josh Rodman was East Coast’s best while Connor Stewart kicked two of the Eagles’ four goals.

After the hurly burly of Round 1 home matches it was nice to head for away pastures. Unfortunately the Divisional nature of the AFL Sydney competition means teams are scattered far and wide across the city for away matches.

Dean Costello is the Leader of the Pack. Picture courtesy of Mark Spiteri

Premier Division were at Picken Oval, the home of Western Suburbs who proudly play on a ground which is side by side with their long established Licenced Club of West Magpies. Wests haven’t had a lot to cheer about in recent years, but it is often a danger to play the Magpies early in the season as traditionally they are always good off season recruiters. 2015 was no different with lots of new names in the Football Record, including some from the much maligned Campbelltown Club who had withdrawn from the Premier Division competition in the week leading up to Round 1.

Both sides had lost their opening round clashes by less than a kick, but it was the Eagles viagra online safety wearing their brand new away strip who started magnificently and had three goals on the board in as many minutes to shell shock a confident Wests. They never recovered from that early onslaught and went further behind both in confidence and on the scoreboard the further the game went. 24 points behind at quarter time, 39 at half time, 74 at ¾ time and eventually losing to a rampaging Eagles outfit by 88 points. East Coast were determined not to experience a last quarter brain fade like last week.

Scott Pierce in his best ever performance in an Eagles jumper kicked seven from full forward and Andrew McConnell got four which along with his superb around the ground game, earned him the match committee’s nomination as the Eagles’ best. 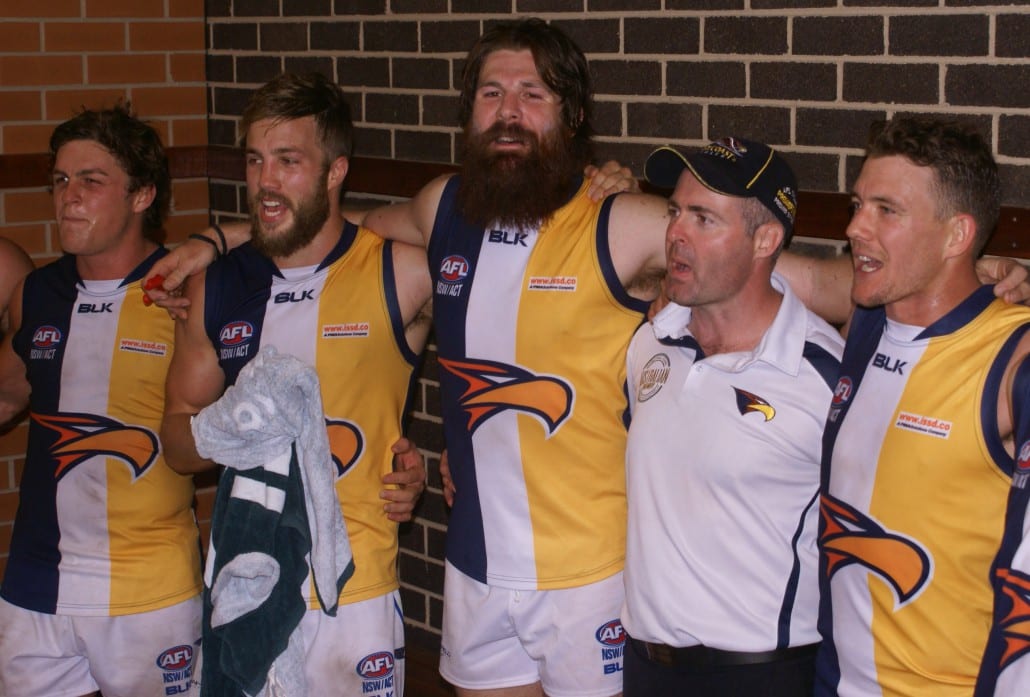 Division One were at Macquarie Uni for a match which most expected them to win. The players did too in the first quarter when they opened strongly with an impressive first quarter performance. Unfortunately things fell away after that for the visitors with only three more majors being posted, compared to Mac Uni’s 11 goals. Cameron Arndt was best in an unexpectedly disappointing team performance.

The Div Three boys came up against a Magpies side that boasted more fire power than we could muster. A very poor second quarter saw the Eagles held goalless and it was the five majors that Wests kicked in this term this term which was ultimately the difference between the two sides.

Anthony Baddock played a blinder in the centre and got the coach’s nod for BOG on the day.

At Sydney Uni, Greg Thomas’ U19s got off to a great start and remained strongly in the game up to three quarter time. Injuries however proved their downfall in the last quarter and a depleted team was overrun by the home side when they allowed them to kick six goals in the final term.   Joel Walsh and James Monks were best for the young Eagles while Isaac Heath steered four through the big ones.

Trent Stubbs nails one of his five goals for the day. Picture courtesy of Mark Spiteri.

Sydney’s big wet during the week was caused (believe it or not) by an “East Coast low” as the Weather Bureau calls it out in the Pacific Ocean. This low pressure system brought unbelievable rain to the city and suburbs, the outcome of which caused AFL Sydney to postpone all matches apart from Premier Division.

Kanebridge Oval was in excellent condition brought about by the purpose built drainage system beneath the turf.  So much so that the Club invited the Kellyville / Rouse Hill Magpies Junior club to play four matches in the lead up to the big one at 2.30pm.

The kids and their parents responded big time. Geez, they can eat those kids!! 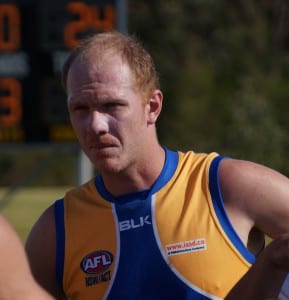 After the traditional on field memorial service for the Anzac Round, the East Coast Eagles and the UTS Bats commenced their own battle. UTS were sitting on top of the ladder coming into Round 3 and a difficult match was expected for the afternoon.  UTS won the toss and kicked with a strong breeze to the northern end but it would be the only thing they would win all day however as the home side made mincemeat of a team which promised so much.

38 scoring shots to 6 at the end of a miserable day for the Bats was the unfortunate story for the visitors. They were crushed by a hard running, hard tackling side which took all before it in an emphatic 122 point victory.

Trent Stubbs with five goals, James Ford with four and Diamond Jack Dimery around the ground took the best player and goalkicking honours.

Read this weeks Red & White Online review of the Round 3 action.

Extravaganza results updated to Round 2