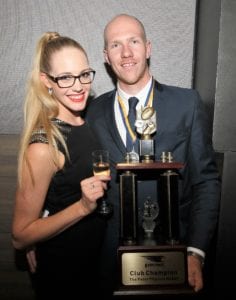 Kieran and his partner Ellen with the Club Champion hardware. Picture by Scott Waterhouse

Click here to view the album of photos for Club Champion Night.

Champion centre half back Kieran Emery completed a dream season on Saturday night when he won the Peter Physick Medal to be crowned the 2016 East Coast Eagles Club Champion by just one vote from Stu Turner with Andrew McConnell a further two votes behind.

Emery had previously won a Premiership Medal and the Rod Podbury medal for the best player in the Grand Final.  And he was a member of the AFL Sydney Team of the Year.

Ryan Fitton went “Back to Back” by again winning the Billy McLeod Medal as B&F in Reserve Grade. “Fito” only played 10 games in the Division One side as he was often promoted to the Premier Div side due to a lengthening injury list in First Grade throughout the season.

Shaun Suitor was victorious in Third Grade whilst Aidan viagra no prescription cheap Chapman was a clear winner in Under 19s.

Other medal winners in all teams are shown in the Year Book.

Club Awards were eagerly anticipated with Paul Meyer being honoured with the President’s Award, the Stewart Family (Tracey, Paul and Tom) with Club Person(s) of the Year, Blake Jones was Clubman of the Year and Bronwyn Bailey, Volunteer of the Year.

Jack Dimery was presented with the Eagles Award for his Phelan Medal win and his Foxtel’s “The Recruit” appearance.

Player Life Memberships were awarded to Rowan Bilkey, Jared Madden and Jared Patira for their service to the East Coast Eagles.

Retiring players Trent Baker, Damien Charleston and Rowan Bilkey were also given moving send offs with individual video tributes to their playing careers with the Eagles.

You can read about all of the above winners, along with reports from all sections of the Club and its administrators in the 2016 East Coast Eagles Year Book now available on-line.