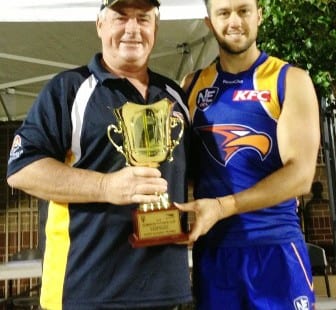 There will be more than just four NEAFL points up for grabs this Sunday at Drummoyne Oval, as the Sydney Hills Eagles look to defend their ownership of the Gordon Physick Cup against Sydney University.

The Gordon Physick Cup celebrates the work of the invaluable volunteers who support both clubs, with the shining examples of Harvey Gordon and Peter Physick who have provided outstanding support for Sydney University and the Sydney Hills Eagles respectively.

For a man in his 80’s, Harvey Gordon shows no signs of slowing down and is an inspiration to everyone at Sydney Uni. Often the first to arrive and the last to leave, Harvey’s passion and love for the club has been unmatched, since he first arrived at the club in 1990.

Whilst not traditional rivals, the Eagles & the Students have developed a fierce competition over the last five years.  In the last 10 games buy provigil from uk between these two sides there have only been two games with a margin exceeding 4 goals.  If you take out these two games, the average winning margin is just over 2 goals which highlights the closeness of the contests between the Eagles & the Students. Both sides have some exciting talent in their line-ups this year with Sydney Uni boasting the likes of Brabazon, O’Dwyer, Barton, Derickx & Sierakowksi, whilst the Eagles have names including Jericho, Stubbs, Reed, Vlatko, Dimery & Ferguson.

The importance of the fixture is not lost on Eagles Coach Michael Sankey. “Only one game separates these two sides on the ladder this year and whilst there is only 4 points available for the winner, there is more on the line as the sides compete for the Gordon Physick Cup . The Eagles will be looking to turn the tables on the two loses to the Students so far this season.  I am sure we are in for a great contest this coming Sunday”, said Sankey.

The Eagles are coming off the tough road trip to Aspley but will be buoyed by the strong performance that saw them narrowly go down to the 4th placed Queensland side. Sydney University is also coming off a loss, having gone down by 46 points at Eastlake.

The Sydney Hills Eagles encourage all supporters to get along to Drummoyne on Sunday afternoon for the Sydney derby at 2.00pm.