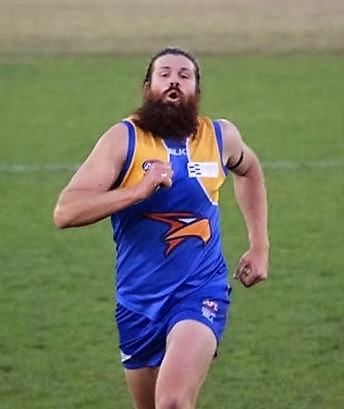 With thanks to Michael Shillito for providing the words ….

We’re into September, and the finals action is heating up. A big weekend of finals footy saw East Coast Eagles become the first team to qualify for this year’s Grand Final. St George and North Shore will fight out for the other spot.

Saturday was fine, but windy and despite some rain during the week Blacktown International Sportspark was in good condition. There had already been plenty of action with two NEAFL semi-finals played before the evening saw the Second Semi-final, with East Coast Eagles taking on St George.

The Eagles have enjoyed a stellar season, despite a shock loss to North Shore in the last round of the home and away season. Finishing minor premiers for the second year in a row had given them last week off.

St George had also enjoyed a highly successful regular season, dropping only three games to finish second on the ladder. A comfortable Qualifying Final win against UTS had taken them to the Second Semi. And with a place in the Grand Final on the line, it was always going to be a toughly-contested game.

The first quarter was tight, with easy possessions hard to come by. The stakes were high, and both teams were determined to deny the other any advantage they could. And the fluky, inconsistent wind wasn’t helping, with frustration setting in as both sides were forced into turnovers. But around the ground, although there wasn’t much in it, the Eagles looked to have the edge. With three goals to one, the Eagles led by 12 points at the first change.

The lights had taken over by the time the second quarter had got under way. It would be a more open quarter of footy, as the two sides tried to build a winning score. The Dragons attempted to get back towards the lead, only for the Eagles to find the answering goals. And when East Coast attempted to pull away, the Dragons had the replies to keep themselves in the contest. Three goals apiece for the quarter saw the Eagles leading by 13 points at the long break, but the contest was far from buy viagra online generic pharmacy over.

But the third quarter is often known as the premiership quarter, and this is where the title contenders can pull away from their rivals to build a winning lead. That’s what happened this time, as the Eagles emerged from the rooms after the half time break having lifted a gear. And the increased intensity and speed was too much for the Dragons to counter. The scoreboard would tell the tale, as the Eagles added four goals to one to extend the lead to 31 points at the last change. Ruthlessly efficient and getting the job done when it mattered, the Eagles had a scent of a Grand Final in their nostrils and weren’t letting go.

The game was safely won by the last quarter, and the Eagles already knew they would get next week off to prepare for their assault on the title. But to the Dragons’ credit, they weren’t giving up and St George would win the last quarter. A run of four goals to three restored some momentum to the Dragons, but it wasn’t enough to prevent the Eagles taking the game by 29 points.

Jamie Vlatko was again outstanding for the Eagles, controlling proceedings on the forward line with an impressive bag of six goals. He, along with Eugene Kruger and The Recruit contender Jack Dimery were amongst the Eagles’ best. The shock defeat in last year’s Grand Final still hurts the Eagles and has motivated them through this season. Now they are just one game away from putting things right. But, as they know all too well, the last game is no certainty and there’s plenty of hard work to be done in two weeks of preparation. Nick Shipley, Karl Merson and Jesse Mudge performed impressively for the Dragons. It wasn’t their day, and they were never really able to get their best game going; but as they showed in the last quarter, they are capable of being competitive against the Eagles.

St George’s season isn’t over, and they have another chance to qualify for the Grand Final. It’s their fourth Preliminary Final in a row next Sunday, but the Dragons will be hopeful that this time they can finally break through and be a part of AFL Sydney’s showpiece game.