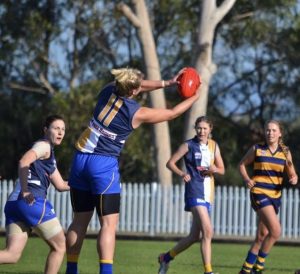 Congratulations to the East Coast ‘Eagals’ (as they love to call themselves) in winning their first ever game of footy by 33 points against Sydney Uni in Round 1 on April 1st 2017.

Thanks to Andrew McMurtry at the Rouse Hill Courier who went with the following story in Monday’s paper.

You can see the on-line version by clicking here.

The East Coast Eagles women’s side has claimed a 33-point win in its first match in the Sydney AFL division one women’s competition on Saturday.

Inaugural women’s captain Sarah Ford said she was thrilled by the result. “I’m speechless, I just couldn’t be prouder of those girls,” she said.

“I wish we kicked a bit straighter but for some of these girls, they only picked up a ball three weeks ago so we could not be any happier.”

For Ford, who was voted captain by her teammates, said it was a huge honour to lead the team to its first win.

Having been around the club for over a decade supporting her brothers, it was her first regular season game with only five of the Eagles boasting football experience.

“To be able to be a part of it, not just as a supporter but as a player, is just amazing,” she said.

“There are so many girls in the same situation and they’ve been around for ages and there’s no other club we’d rather play for.”

After the success of the national AFL Women’s competition earlier this year, club president Jon Gawley said an Eagles women’s team had been on the cards for quite some time.

“There has been a growing interest in women’s footy for years,” he said.

“I honestly think it will just grow and grow and it will complement the whole football club as well.

“For the club, it’s the direction the AFL is going and we’re glad to embrace it.”

With the women’s side kicking off the season with a win, it was a mixed weekend across the other grades with a huge 13.19 (97) to 0.1 (1) win over the South West Sydney Magpies in division four, but losses in all three other grades.

Magpies Academy becomes the Eagles Academy in 2017
Scroll to top