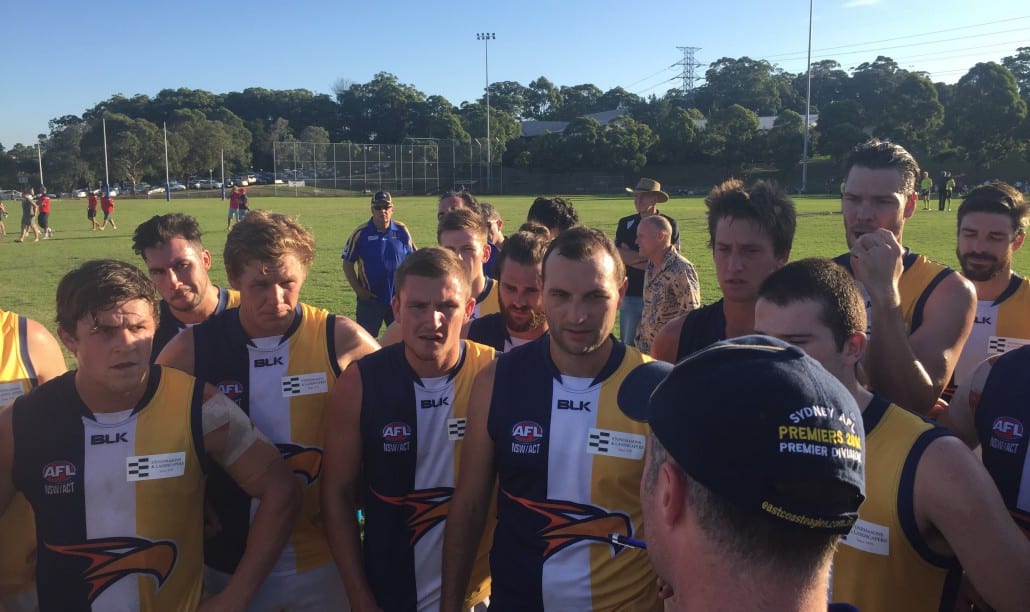 Players and coaches may come and go, and many did during the off-season. But the game of footy goes on. A long hot summer, clubs working hard in pre-season training; all building up to the start of a new season. A fresh start, the slate wiped clean. Over the upcoming months, dreams will be realised and dreams will be shattered.

The season started on Saturday, under bright sunshine and with the mercury moving over 30 degrees, one of the warmest season opening days for many years.

A twilight clash at Mike Kenny Oval saw Pennant Hills unfurl their premiership flag, one final chance to bask in the spoils of last September’s heroics. It had been a remarkable Grand Final, and the record books will forever show that the Demons are 2015 champions.

But winning the competition is one thing, defending the title is another; as teams will lift to play them and the hunter now becomes the hunted.

The Demons were taking on East Coast Eagles, the team they beat in last year’s decider, in the Warren “Pops” Quintrell Shield. And both clubs had lineups not too dissimilar to those playing on Grand Final day last year. Every club has players come and go, but neither had lost too many. There wasn’t that much separating the teams in the first quarter. Both sides were keen to make their mark on the season with some early attacking, leading to a high-scoring and free-flowing opening term. Five goals to four in the first quarter saw the Eagles lead by eight points at quarter time.

The Eagles took the upper hand in the second quarter, as the defence tightened and the Demons were unable to find any avenues to goal. At the other end, the Eagles were getting plenty of run through their midfield, and Andrew McConnell in particular was presenting as a handy target up forward. A string of 50 metre penalties didn’t help the Demon cause; but there was no denying this was an Eagles side with plenty of quality still on their list taking the first step towards dealing with some unfinished business after last year’s shock.

The game was safely won, and the Eagles took their foot off the gas in the last quarter. The Demons salvaged something back in percentage during the final term with four goals to two, cutting the final margin to 36 points. But this was East Coast’s night, extracting some level of atonement and getting their campaign to go one better in 2016 off to a flying start.

In a display of impressive accuracy in front of goal, the Demons didn’t score a behind in the first half and the Eagles likewise after half time; with a combined total of 26.8 for the night.

Andrew McConnell was a dominant force for the Eagles, kicking six goals in a best-on-ground performance; while Stuart Turner and Ben Bourke also featured prominently for the Eagles. It wasn’t Pennant Hills’ night, but Aaron Crisfield, Tim Wales and Ted Widmer worked hard all game.

An Eastern Suburbs University derby at Waverley Oval saw UTS play host to UNSW-ES in what has become a traditional season opener. It was a day that saw an evenly-contested first half before UTS pulled away after half time. Both clubs field plenty of teams that had been playing each other earlier in the day, so there was no shortage of lower-grade players happy to stick around to support the seniors. And they were treated to an absorbing contest early. The first quarter was an arm-wrestle, both sides working hard to find a weakness in the other and putting on some tight and tough defence. The Bulldogs looked to have a slight advantage around the ground and added three goals to two, holding a nine-point advantage at quarter time.

The second quarter was a shootout. The lead changed hands several times as both sides threw caution to the wind in their quest for attacking football and the priority to put a score on the board. Forwards on both sides were looking lethal as the goal umpires’ flags were waving with regularity. Seven goals to five in favour of UTS saw the Bats turn their quarter time deficit into a five point half time lead.

It had been an entertaining half to watch, and the match was in the balance, but when the teams returned for the second half, the momentum of the game had changed. The Bats emerged full of running, handling the hot conditions better, finding options to move the ball forward and cutting down on the turnovers. And the scoreboard began to reflect the Bats’ emerging dominance as they scored five goals to one for the quarter to stretch the lead to 27 points at the last change.

The Bulldogs refused to capitulate and won the quarter with three goals to two to cut the final margin to 22 points. It had only been one lopsided quarter that decided the contest, with the rest of the game being evenly fought. But that quarter was enough to give the Bats the valuable competition points.

On a hot day, Daniel Breese was a welcome relief for the Bats with four goals, while Zac Parsons, Rohan Bates and Jason Fleming made important contributions around the ground to the UTS cause. Alex Foote, Alex McKenzie and Joel Robbie were the Bulldogs’ best.

Manly’s quest for a premiership three-peat last season came to an end when they were beaten by St George in the first semi-final. And the Dragons repeated the dose at Weldon Oval on Saturday with a comprehensive 63-point win over the Giants. Preliminary Finallists for the last three seasons, St George have got the services of some handy viagra purchase reviews recruits to further bolster their lineup for 2016 and aim to go all the way to the Grand Final this year. While it’s been a relatively stable off-season for Manly, with not many departures and keeping a similar side to those that have been so strong since they went up to Premier Division in 2013.

The first quarter saw little to separate the two sides, both taking the time to try to work out each other’s weakness and defending resolutely when the pressure was on. The Dragons scored three goals to two in the first term, holding a nine-point lead at the first change.

St George got on top in the second quarter, and the scoreboard began ticking over with regularity. Not every kick hits its target, and several went sailing wide of the big sticks when they should have been kicked. But weight of possession took its toll as the quarter unfolded and with five goals to one in the second term, the Dragons returned to the rooms at half time with a 36-point lead.

The third quarter was tighter and more physical than the second, but the Giants were unable to make any dent in the deficit. Instead it was the Dragons who asserted themselves further, scoring three goals to one in a low-scoring quarter to extend the margin to 47 points at three quarter time.

St George had the game in their keeping, and the pressure valve was released in the final term. It was a more open and free-flowing contest, with the players given more licence to exhibit their skills during the last quarter. But again it was St George who had the edge, taking advantage of every opportunity to score six goals to three for the quarter.

In the end it was a 63-point margin in favour of the Dragons. Nick Ryan spearheaded the charge up forward to finish with five goals; while Paul Sain, Daniel Tomlins and Earl Shaw were ball magnets around the ground. The Giants, although well beaten, found hard workers for the duration in Connor Pettersson, Anthony Robertson and Eric Burke.

The round was completed on Sunday under lights at Henson Park when Sydney Uni took on Wests in a game that would be up for grabs until the final minutes.

It was a tight and tough opening quarter, both sides laying on plenty of physical pressure and defending resolutely. Goals were hard to come by in a quarter in which the backlines had the upper hand and easy possessions were rare. Just one goal apiece was kicked, with the Students leading by two points at quarter time.

The Students finally found some avenues to goal in the second term, at times threatening to run away with the contest. But the Magpies weren’t going to go down without a fight, and some crucial answering goals kept them within striking distance. It wasn’t always pretty to watch, but this was a contest between two willing opponents. And with five goals to three in the second term, Sydney Uni took a 10-point lead into half time.

The Magpies lifted their work rate in the third quarter, but their inaccuracy in front of the big sticks would hurt them as their return of 3.5 for the quarter would prevent them from regaining the lead. The Students would also score three goals, but their defenders were required to dig deep at times during the quarter as they repelled several attacking moves by the Magpies. And with just seven points separating the two sides at the last change, the game was set for a thrilling finish.

It hadn’t been an easy pre-season for the Magpies, but they were near enough to have a crack at a first-up win. And they gave it their best shot in the last quarter; and reaped four goals for their efforts. But they were unable to get themselves in front, and it was the Sydney Uni side who had the fresh legs and were able to run the game out. Seven goals would come to the team in blue and gold hoops during the final quarter, enough to take out a 25-point win.

It may not have been a game that reached any great heights. But the Students, aiming for a third straight finals appearance in Premier Division, got their campaign off to the start they needed. And for Wests, although beaten on the night, they showed enough to assure themselves that they have what it takes to be competitive against the top sides in 2016.

Next week sees Wests take on UTS at Picken Oval, a clash between two sides that missed the finals last year and are keen to be part of the September action this time round. Meanwhile at Blacktown, it will be a blue and gold derby as Sydney Uni take on East Coast.  North Shore enter the competition after the opening round bye when they host UNSW-ES at Mortgage Choice Oval (formerly Gore Hill), while a Sunday blockbuster at Olds Park sees St George host Pennant Hills.

Next week’s games are all on Saturday April 9th.

Premier Division take on Sydney Uni at Henson Park at 4.00pm in the Physick-Gordon Cup challenge.

Division One play Sydney Uni at Henson Park at 2.00pm.

Under 19’s are up against North Shore at Mortgage Choice Oval (formerly known as Gore Hill) at 5.15pm.

And Division Three play Campbelltown at Kanebridge Oval at 10.00am.