You are here: Home1 / The Club2 / Facilities 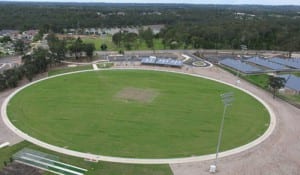 The aerial photo (approx October 2008) is before the oval turf had fully matured, the landscaping added and the goalposts and electronic scoreboard were yet to be erected.
The East Coast Eagles played their first ever home game against North Shore in Round 2 of 2009.

The Eagles’ new home at the corner of Withers and Commercial Roads in Kellyville / Rouse Hill had been under construction for some 18 months.

The process was a lengthy one, hamstrung by site preparation complexities and the unseasonal heavy rains which Sydney experienced in January & February 2008.

Bruce Purser Reserve, as it is officially named in the Baulkham Hills Council records, should have been a reality some time in 2008 with the Club expecting to receive a handover of the facility in late July from the Council and the contractors.

Regretfully however, the cold winter months are not advantageous to the establishment of newly laid turf and the club reluctantly accepted the advice of AFL turf experts that it would be folly to attempt to train or play on the oval before the warmth of the spring sun could assist the roots to take hold. To play on it then would render the grass useless for following seasons.

Whilst disappointing to all at the Club and Sydney footy in general, it was accepted as the correct decision hence the Eagles were once again without a home ground for the eighth year in succession. Meanwhile training remained at our temporary base of the Castle Hill Showground through until the end of season 2008.

With the approval of the Sydney AFL, all home matches originally scheduled for the new venue, were moved to Charles McLaughlin Reserve, Crestwood Drive in Baulkham Hills. “Charlie” as it is affectionately known, is the home ground of the Baulkham Hills junior football club who were kind enough to accommodate our request for a return to the ground which was originally the home base of our senior sides up until season 2000.

Whilst the official Council initiated name of the new venue is Bruce Purser Reserve, the the Eagles are permitted to obtain a naming rights sponsor for the Oval itself and interested parties may seek further information by using the contact form on this site.

Eagles were about to land… at home.

It had been a long time on the road for East Coast. The senior buy cialis brand online component of the club, formerly part of the Baulkham Hills Falcons as they were then known, amicably broke away in 2000 to broaden the scope of senior football opportunities in the North West Sydney region. Behind them they left Charles McLaughlin Reserve in Crestwood which had been a home ground for many years and is still used to this day by the Baulkham Hills Junior Football Club. This was the start of a long time “away from home”. For the next eight years the Eagles became the nomads of the Sydney AFL competition, without enjoying the benefits of a home ground, but in 2009 this was all about to change.

Over those last eight years, the Eagles called many places “home”, including grounds in Alexandria, Marrickville, Panania and at Macquarie Uni which meant a lot of travelling for players and supporters who are largely based in the North West of Sydney. In 2009, the Eagles finally established themselves at Bruce Purser Reserve in Rouse Hill. This purpose built Australian Rules venue is a development of the Hills Shire Council  with financial assistance from the AFL, Cricket Australia and the East Coast Eagles.

Bruce Purser Reserve is on the corner of Withers Rd and Commercial Rd Rouse Hill, just a few steps from the brand new Rouse Hill Town Centre. The ground has become the premier venue for Australian rules in the North West and the Eagles have made it a ground that opposition teams dread coming to.

The Eagles share tenancy of the facility on a seasonal basis with the Hurricanes Cricket Club. We enjoy a great relationship with our summer colleagues and each club is extremely proud of the place we both call “home”.

Past President of the Eagles, Peter Physick recalls recent years for the club. “It had been a tough time for the Eagles not having a home ground for so long. It made it very hard for our members and supporters but now we have a great opportunity to put the North West region of Sydney on the AFL map. At the same time, it is fantastic for us to have a place of our own.”

The Australian Football League have of course placed a renewed focus on Aussie Rules in the Greater West with the GWS Giants entering the AFL national competition in 2012.  Bruce Purser Reserve and the East Coast Eagles play a big part in that resurgence which gives the community a real taste of things to come.