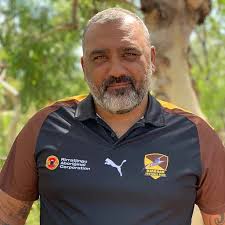 Coming into pre-season a real sense of fresh air at East Coast ushered the Eagles playing group and community into a new era, following Lindsay Scown’s decision to step down from his head coaching post.

The 2020 season will embark a changing of the guard in the Eagles Nest as we welcome our new head coach: Hayden Rickard.

Now that I have the logistics covered, let me present to you the man tasked with leading our great club into the future, and his unique story to tell……

Q: Hayden, where are you from and what brings you to Sydney?

A: So I am originally from New Zealand, a place called Oamaru, located on the Eastern Seaboard. I moved to Australia in 1998 where I have been based in remote Northern Territory in a place called Nhulunbuy. During my time in NT, I was very fortunate to work with local Indigenous people, setting up football programs from scratch which helped take my coaching to the next level. My family and I have made the decision to move to Sydney to support our children’s education.

Q: What are your experiences in Australian Rules Football?

A: I have had very fortunate experiences in this sport. I was originally headhunted in the community to use football as a vehicle, leading to full-time coaching employment. My local club was in Nhulunbuy – Djarrak Football Club, who play in the Gove AFL competition, a small remote competition in the Northern Territory. The players in the program at our club were fortunate enough to play footy 12 months a year. Outside of this, I would spend time preparing players for the Northern Territory Football League (NTFL) with the Darwin Buffaloes. I have also been fortunate enough to dip my toe in and build an extensive football knowledge from opportunities with many different professional organizations such as NT Thunder, Geelong and Richmond Football clubs.

Q: What are your experiences in other sporting arenas?

A: Throughout my coaching career in Australian Rules Football, I have been fortunate to develop my mantras with opportunities at many different professional sporting organizations. These include the Sydney Kings basketball, sporting organizations in the US and in the world of New Zealand Rugby.

Q: What attracted you to the East Coast Eagles?

A: Upon our family’s decision to relocate, I reached out and looked at the Sydney AFL landscape. Immediately, the East Coast Eagles stood out to me, observing their website and social media platforms really proved to me that the Eagles Nest carried themselves as a strong brand in the community with a real level of professionalism. Through meetings with Paul Eastman, Jon Gawley, David Arndt and Ben Bourke, I gained a strong sense of commitment at the club that I wanted to become a part of. I was thrilled to be offered the head coaching position.

Q: What are your approaches to building a strong football club both on and off the field?

A: For me on and off-field go hand-in-hand to building sustainable success. Having conversations with people in and around the club indicated to me that there was already a strong culture, which was great for me as I market myself as a culture coach. I believe off-field culture directly impacts sustainable on-field success, but I recognise that this can be hard to define. For me culture encapsulates the little things like shaking hands before and after training, sweeping sheds and presenting ourselves in the best shape we can. The biggest measurement of culture is how you are measured in other circles and this is player driven.

Q: How important is pre-season in building a base for the season ahead?

A: Pre-season is vital, an opportunity for me to understand different personalities at the club and identify areas of strengths and weaknesses in order to develop a plan of attack to ensure we are competitive across all grades. At the moment for me its early stages and I am enjoying getting a feel for individuals who I may see as an alpha with a strong skillset but then lets themselves down through a lack of talk, and vice versa. It is important for me to build strong training habits into the group and learn how to train our style which is still developing as we continue the preseason block into the New Year.

Q: What are your expectations for your leadership group?

A: I live by the old adage that leaders create leaders. Leadership can be measured through how current leaders put aside egos to bring through new leaders. This will be a key indicator for my leadership group within the Eagles Nest.

During the first weeks of pre-season Coach H’s values have concentrated on taking time with the footy to prevent repeated mistakes, imparting on players that perfection is not an entitlement but rather something that can be earned over time with dedication to the craft.

“Become the best version of yourself”

This is an expression Coach H has used consistently thus far in pre-season, a strong indication of how Hayden views the role of coaching footballers as people, and how we should measure ourselves in all walks of life.

Without doubt there is plenty to look forward to and be excited about this coming season at the East Coast Eagles, and as a player I personally cannot wait to become part of the journey Hayden plans to take us on in Season 2020 and beyond.

I thank Hayden for his time.