Latest News
You are here: Home1 / Latest News2 / Latest News3 / Match Reports4 / Division 25 / Back to Baulko Snapshot: Around the Grounds

Back to Baulko Day was an outstanding showcase of the past, present and future of the East Coast Eagles football club in Round 16 on Saturday.

As for the remainder of the games on Back to Baulko Day, lets take a look around grounds….

The Reserves faced must win football against a Pennant Hills side who dominated them in their last meeting back in Round 8. Entering the clash Pennant Hills sat steady with just two losses on top of the table, with the Eagles clinging onto 5th spot, one loss away from slipping out of finals contention. Important defensive inclusions in Luke Mansour, Zach Johns and Matthew Scholz became crucial in the war of attrition battle, as the Eagles undoubtedly owned their opponents in the second half, especially in the 3rd period kicking four goals to none. Martin Karafalis continued his outstanding year deservedly winning best on ground honours, and Jared Patira and James Ford continue forcing themselves as one of the strongest key forward combinations in the competition kicking 5 goals between them. The Ressies saved the best performance for Back to Baulko day gaining real momentum at the right time of year. 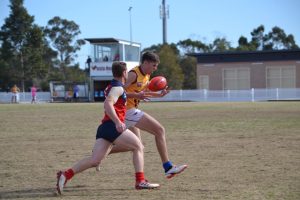 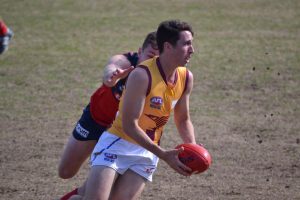 Under 19s Division One – Eagles defeat Demons 8.14.62 to 2.8.20
Club Legend Trevor Hangan called for someone to produce something special for the 19s on Back to Baulko day, and there were plenty of special performances to choose from. Skipper Ryan Van Vliet was tremendous taking countless intercept marks in defence. Bailey Sims and Matt McVey were clinical and speedy up the ground in both attack and defence. Jesse Foxall was brutal at full back and forward pocket star Nipper Adams busted his nose early in the second quarter and returned, continuing his outstanding 2018 form. The Under 19s have fallen out of games too many times in 2018 to achieve finals football, but on Back to Baulko day there was far too much to play for and they would not fall in the same trap. They played their most promising four quarter game of football and inspired a successful day on the field for the club, gaining the first win of the day for the Eagles. 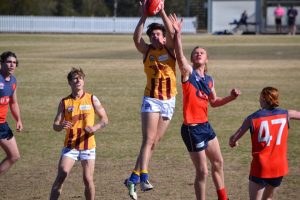 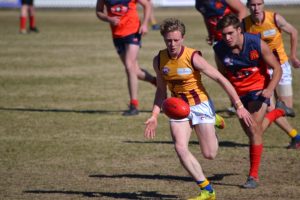 Only a month removed from they’re previous fiery clash, the EaGals closed out Back to Baulko day with a barnstorming win over rivals Pennant Hills, to write another chapter in this slow burning rivalry that continues to get hotter every time they meet. The EaGals fought off early injury concerns to dominate the first half, leading by 3 goals at the main interval, as Sarah Ford was absolutely lethal in front of the sticks, nailing four crucial goals. Youngster and NSW Rams representative Brenna Tarrant was massive on Saturday as well, proving her unparalleled utility value and leading her side to back-to-back wins over the Demons enemy. The EaGals were met with resistance in the second half, but not willing to go down on the biggest day of the year, they pulled through and put Pennant Hills to the sword in the final quarter. Midfielders Chloe Arndt, Em Goodsir and Caiti Rogers were fantastic, whilst Full-Back Jess Britton controlled the backline superbly. Currently sitting 3rd, the EaGals will look to finish the year strong with one eye on finals footy for the second consecutive year.

First game of the day and the Div 2 boys let no one down, despite not being victorious against the rival Demons before making their presence felt on the HILL. Club stalwart Tim Physick was once again outstanding, a bull in defence, but the Eagles were made to rue some missed oppourutnities in front of goal with the game on the line. They never gave up, but the Eagles just could not match the Demons on transition, as Pennant Hills constantly threw caution to the wind towards goal and more often then not coming up trumps. The Demons were smooth, but the Eagles did not make the win easy for they’re opponents, absolutely bringing the pain and laying some massive tackles, setting the tone for the rest of the club later throughout the day.