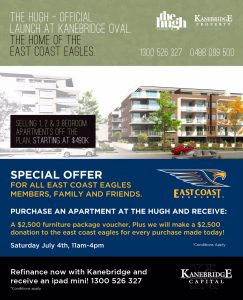 This Saturday July 4th will see Kanebridge Oval invaded by Eagles …. past, present and future to watch the Eagles take on Pennant Hills in four separate games across the course of the day.

The traditional Back to “Baulko” round is being held in conjunction with a past players’ reunion of all who have ever pulled on a boot with the Baulkham Hills Falcons and the East Coast Eagles.  In the case of the Falcons, it is players from 1976 to 1999 and for the Eagles 2000 – 2014, plus supporters from those two eras.

An enormous social media campaign has been conducted to alert as many folk as we could possibly contact and indications are that we will have a bumper crowd. Included in that are players from the Kellyville – Rouse Hill Magpies Junior AFL Club and the Magpies Academy who will be playing in two Auskick matches at half time of the main Premier Division game which starts at 2.10pm.

To further inflate the crowd our ground naming rights sponsor Kanebridge Limited has chosen this day to launch their new Apartment development “The Hugh” in Kellyville.  As you will read on the flyer with this story, there are significant benefits to the buyer and the East Coast Eagles should you make the decision to purchase an apartment in “The Hugh” at the ground on Saturday.

We also cheap viagra eu welcome PPC Moulding Services who are our Match Day Sponsor for this round 11 clash and also Louis Carr Real Estate who are on board for the day to promote their services to East Coast Eagles Members, supporters and players.  Again the Club will benefit if you decide to list and sell your home with Jon Lee at Louis Carr.

There will be a jumping castle for the kids, not to mention face painting for those who want an Eagles or Demons logo painted on their dial.

The renowned Eagles BBQ will be doubled in size for Saturday and there will be several refreshment stations ready to quench the thirsts of those who will be there to enjoy the fun and the footy.

The Premier Division game is the AFL Sydney Match of the Round and will be live streamed at Youtube.com/aflsydneylive if you can’t make it to the match.

And finally to complete a very big event for the Eagles, this week’s round of football in Sydney is Beyond Blue Day to increase awareness and understanding of depression and anxiety in Australia. The umpires will be in sky blue and players in the Premier Div game will be wearing specially manufactured blue socks as a mark of their recognition of these illnesses.

Look forward to seeing you at Kanebridge Oval (corner Withers and Commercial Roads in Rouse Hill) on Saturday July 4th ….